Keep Smiling with Confidence Thanks to Composite Fillings in Rochester Hills

If you are looking for attractive, healthy fillings for a new cavity or to replace old fillings, we can help. Please call (248) 651-0897 today for an appointment with cosmetic dentist Dr. Matthew Wolfe at Signature Dentistry of Rochester in Rochester Hills.

What Are Tooth-Colored Fillings?

Tooth-colored fillings, sometimes called white fillings, are simply fillings that match the color of your natural teeth. They can blend in and make a seamless repair to your teeth. No one needs to know that you have had cavities or that you’ve gotten fillings.

Technically, there are two types of tooth-colored fillings: ceramic and composite. Ceramic fillings have some benefits and are available upon request, but for most people, composite fillings are the best choice.

Composite fillings are an advanced polymer matrix that includes ceramic particles for additional strength. This starts as a soft putty that we shape to fill the cavity. Once it’s in the cavity, a curing light causes it to harden. It’s the same material we use as dental bonding for reshaping teeth, which shows you how cosmetic and strong the material is.

Of course, most people are initially attracted to composite fillings because of their appearance. They look just like your natural teeth. In the past, many people paid a significant premium to get this type of filling, but today their price is fairly comparable to metal amalgam fillings.

When used properly, they have a high success rate that is comparable to metal amalgam fillings.

First, Dr. Wolfe will remove the damaged tooth structure as well as any old filling material. But there’s no need for additional drilling, as with metal amalgam fillings. Then Dr. Wolfe applies a light etch to improve the bond between the filling and your tooth. He spreads the filling material into the cavity. Once the material fills the space, we use a curing light to harden the material. In some cases, a large cavity might require a few rounds of spreading and hardening.

Finally,  the filling is polished to give it a luster like natural tooth enamel.

What’s the Difference between Metal and Tooth-Colored Fillings?

Metal amalgam fillings are a mix of powdered metal that uses liquid mercury to create a malleable solid that can be jammed into your cavity. Even when they were invented, nearly 200 years ago, people were concerned about the mercury in these fillings. But they were the only real low-cost alternative to gold fillings at the time, so they became popular. Now that we have an alternative, people are turning away from metal fillings.

The mercury in metal fillings is toxic, and it doesn’t stay in the fillings. It migrates through the body and accumulates, leading to high mercury levels, including high levels of toxic methylmercury.

In addition, metal fillings need a bigger hole than composite fillings. There has to be enough room to jam the fillings into the hole. So even if you have a small cavity, the dentist might need to make a bigger hole for the filling.

The additional drilling and the force of pushing the amalgam into the tooth makes the procedure more uncomfortable than with composite fillings.

Of course, metal fillings look unattractive. As silver fillings, they immediately call attention to your tooth decay. Then, when they corrode and turn black, they can actually look worse than having a mouth full of cavities.

Make an Appointment for Tooth-Colored Fillings in Rochester Hills

If you have a cavity that needs filling or an old filling that is failing, we can help. Please call (248) 651-0897 today for an appointment with cosmetic dentist Dr. Matthew Wolfe at Signature Dentistry of Rochester in Rochester Hills, MI. 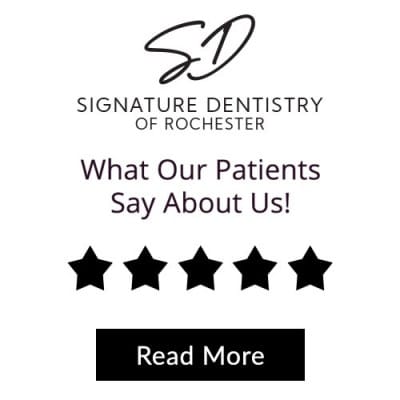